The marketing suite at The Glass House is open.

Every Saturday 10am - 3pm the marketing suite will be open for viewings, by appointment only. Register your interest below.

The Glass House takes luxury apartment living to a whole new level to include a high spec finish in a superb location, lightning fast broadband, secure parking, a gym, a cinema and private function/dining room. 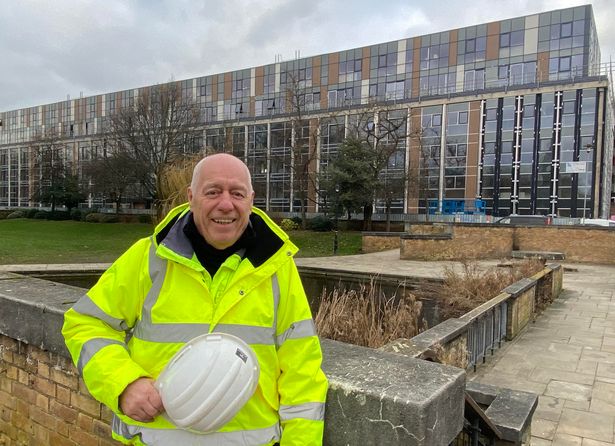 There might be a lot of talk about increasing pension ages but the evergreen Dave Rookyard thrives on extending his working life.

At 73, Dave is showing no signs of slowing down and instead of reaching for a pipe and slippers, he has just accepted a new post as the concierge of The Glass House.

The smart new apartment building in Queen’s Gardens, created by Iguana Developments, is set to open later this year and Dave will take up his new post in April.

Exercise and a sense of camaraderie at work has kept Dave, who loves running and mountain biking, young. He also regularly goes to the gym to do weight sessions.

“My wife and I have been together for 58 years, married for 53 but my friends joke that it’s only 25 years, with all the time I spent at sea.

“I think living like this makes for a good marriage, we are happy with two grown up children and four grandchildren.”

Dave has an interesting background.

At age 15 he walked into The Shipping Federation on Posterngate in Hull and landed a job in the Merchant Navy with various ships, followed by North Sea Ferries which became P&O Ferries. In all, he spent 44 years at sea, rising through the ranks to purser.

Since then Dave worked with a variety of companies. He considered retiring but decided it wasn’t for him and progressed through a number of customer service roles before getting a job with Iguana Properties on its first large-scale apartment development at Essex House in Hull’s Old Town.

“All of my jobs have been working with the public,” Dave said. “On board I was responsible for 1,250 passengers, 150 crew and three ship’s police.

“As chief purser you get to see people at their best and very worst and this type of experience means I can manage people, whatever the circumstances.”

Exercise is also very important to Dave which has kept him going.

“Throughout my career exercise has been very important to me,” he said. “While in dock we would usually work 6am to 12pm when I would go for a long run along the beach at either Rotterdam or Zeebrugge.

“I’d be back to work 4pm-10pm but on call all night in case of emergencies. This type of work requires a lot of energy so being fit was key for me.

“When dealing with people in a difficult situation, I always find the power of silence to be the best approach - always let a person tell their side of the story without being interrupted.

“Allowing them to get their issues off their chest can sometimes bring it to a close.

“When it doesn’t and they are in the wrong, behaving badly and upsetting fellow passengers or staff, then they I would tell them in no uncertain terms exactly what was happening. Either way, they always felt I was treating them fairly.

“Lots of crew were from The Philippines and Portugal. My wife always invited them over for a big Christmas do at our house. We ate traditional Christmas dinner and had a brilliant party. These guys worked really hard, for long hours and so we enjoyed treating them.”

Dave has also worked abroad during his long career.

“I started with all of the ferries from their first launch, right through their lifetime to the scrap yard,” he said.

“I myself retired from ships when I was 56 to take a two-year posting in Venice while the Pride of Hull was under construction.

“This was a fantastic opportunity. I had my own apartment and company car. This was a dream job really as stores manager overseeing the comings and goings of people and deliveries onto the site.

"After this I realised I’d been living out of a suitcase since the age of 15 and I wanted to settle my feet on solid ground.”

Dave’s next move was to work in a B&B in Northallerton. His previous boss from the ships started up and wanted Dave’s valuable experience in catering management and setting up the social side of the business.

But he wanted to return to Hull and took on a number of jobs.

“Over the last ten years I took a few roles within the construction sector and got a job with Iguana Developments on their first major development in Hull’s Old Town,” he said. “Which is 45 apartments at Essex House on Manor Street in the Old Town.

“I was pleasantly surprised when (managing director) Jason approached me about the Concierge job at The Glass House and it’s an absolute privilege to work in such a prestigious development.

“I’ll be there to meet and greet residents each day, manage anything coming into the building and also oversee the place on a daily basis.

“If I had my time again, I wouldn’t change a thing. I felt motivated at sea and this attitude and my experience has brought me to where I am today, enjoying life, feeling fit and loving the challenge each day brings.”

Jason Coleman, managing director of Iguana Developments, admits it was an easy decision to give Dave the job as concierge.

He said: “We didn’t hesitate to offer him the job as he had worked for us previously and his work ethic is outstanding, plus he is fantastic with people.

“Everyone who meets Dave thinks he’s a great guy. We all know that he doesn’t suffer fools gladly, he has a firm but fair approach which means he can get anything done.”

“I think some people will consider themselves unemployable once they pass the age of retirement but we have found that experience and work ethic goes a long way.”

The Glass House is due to receive its first occupants in April.